In a decade or so, flying cab transportation could be a real thing
BOSE is working on its own pair of augmented reality glasses 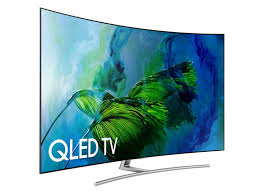 Samsung just unveiled its 2018 lineup of QLED 4K TVs at an event in New York City. The company remains the world’s leading TV maker, and while this year’s sets make modest improvements to picture quality — mainly black levels — the major focus is intelligence and smart home control. The new QLEDs (never, ever to be confused with OLED) ship with Bixby and offer voice assistant capabilities right out of the box. And they also act as a centralized hub for Samsung’s SmartThings smart home platform, giving you on-screen control over all SmartThings-compatible gadgets.

The 2018 QLED lineup includes the Q9, Q8, Q7, and Q6 (in descending order of price and image quality). Samsung still hasn’t given up on pushing curved TVs, as each series will be sold in both flat and curved versions. Pricing details aren’t yet being disclosed for the new QLEDs, but they’re scheduled to begin shipping within the next few weeks, so it shouldn’t be much longer.

The Q9 and Q8 both feature full-array local dimming; the 9 has more zones, but Samsung isn’t specifying how many are in each. FALD is a feature found in many flagship TVs, but this is a first for Samsung’s QLEDs. The improvement should result in deeper black levels and greater contrast. The Q9 also has the best HDR output of the bunch, which Samsung calls “Q HDR EliteMax.” But each of the four new QLED series supports HDR10+.

All new QLEDs have an “Ambient Mode” that uses your phone to capture a photo of the environment behind it, and then creates a matching look on screen. This effect was previously seen on Samsung’s Frame TVs, but now it’s expanding to the QLED line. Aside from the nice look, Ambient Mode will also display temperature, news headlines, personal photos, and other information. It basically turns Samsung’s QLED into a smart display when not in use. You’re not looking at some transparent display; the TV just creates shadows and other effects to make it seem that way.

The TVs can also act as a hub for Samsung’s SmartThings ecosystem of connected gadgets like cameras, thermostats, lights, and so on. The company has recently simplified its approach to the smart home by bringing everything together under a single mobile SmartThings app.

Samsung’s new QLED line of 4K TVs features a technology the company is calling “Ambient Mode.” Before you mount the TV, you’ll snap a picture of the wall it’s going to hang on—it doesn’t matter if it’s brick, wood, patterned wallpaper, or just a white wall—and then after it’s up, you can set that picture as the TV’s background. The result is something that looks like a floating black rectangle mounted on a wall. Samsung even includes a digital version of the shadow this black rectangle would cast on the wall, as if there really wasn’t a large LED panel sitting in the middle of the thin metal strips.

There are five QLED models, with minor tweaks between them, ranging in size from 49 inches, up to massive 88 inches. The televisions have a built-in timer so that the ambient setting will turn off after a while, to spare your electricity bill. Viewing the televisions before Samsung’s event, the ambient really did appear to blend them into the walls at first blush. One, against a fake brick wall, was indistinguishable from what was behind it until you really got close to the screen. The distinction on another, attempting to mimic a painted off-white wall, was a little more obvious. But that’s not really the point—the mode is just intended to give the illusion of invisibility between watching TV, and when you want to show off your new television to a visitor.

Pricing for Samsung’s new TVs wasn’t available at the time of publishing, but they’ll be at the top of end of the market, which tends to range from a few thousand dollars, all the way up to $20,000 for the largest, sharpest models. The TVs are another move away from the giant black rectangles we’ve been hanging on our walls if there’ve been flat screen TVs. Last year, it unveiled the Frame TV, which is meant to look like a picture frame hung on a wall, with a rotating gallery of artwork on display whenever anyone is nearby. The new ambient QLEDs take that same idea, and make the television a little more obvious, and a lot more transparent. Both TVs feature thin cables that combine power and audio-visual feeds into one line (which are then connected to a separate box where you can hook up things like games consoles and cable boxes), which helps aid in the illusion that these are just frames on the wall, rather than smart televisions.

Samsung also announced that it’s partnering with The Weather Channel, The New York Times, and others to overlay content on the ambient TVs. Users will be able to add clocks, headlines, local weather, and their own photos to the ambient screens, which they can queue up from the TV’s menu or the Samsung SmartThings app, which they can also use to quickly set up the televisions.

Some of the backgrounds blend into the wall. (Samsung)

The new TVs will offer other bells and whistles, designed to entice buyers at the top end of the television market. At the CES electronics trade show in January, Samsung announced the new SmartThings app, which consolidates many of its older internet-of-things efforts into a central hub. This now extends to Samsung’s newest TVs, which can be used to control any smart device that can connect to the SmartThings system, like Amazon Echoes, Ring doorbells, and Philips Hue lights. Speak into the remote, which is powered by Bixby, the same virtual assistant found in Samsung’s newer Galaxy smartphones and watch the devices around your home respond to your command. Some of the new QLED TVs, including the Q8 and Q9 models, feature darker blacks than any previous Samsung TV, using a new technology that effectively lights each LED and turns them off when they’re showing something dark, creating completely black areas on the screen.

The interface has also been updated on the televisions, with a new function called “Universal Guide,” which lets users search for any type of content, and then download or switch to the app or TV channel it’s on to watch it. The SmartThings app can automatically send your house’s WIFI login to one of the TVs, meaning you won’t have to run to the upstairs closet and read the password off the back of the router to get your TV connected to the internet.

Samsung’s flagship televisions will be available later this month.

Samsung practically stole the show at CES with its massive 146-inch MicroLED TV, The Wall. But that’s not something most people will be able to afford. That’s where the company’s mainstay QLED 4K lineup comes in. At a media event in New York City today, Samsung unveiled its next generation of QLED TVs, which not only look better, but feature some genuinely useful improvements. They’re an even better option for consumers who want to get rid of the typical cable clutter around their home theater, as well as those looking for smarter sets.

The biggest addition to the QLED lineup is Ambient Mode, a new feature that lets them blend into the background when they’re off. If you’ve got a brick wall, for example, the TV will display the same pattern. It might seem superfluous, but it’s a smart way to keep your set from just being a giant black mirror when it’s off. You can also overlay information on top of the background, like the news and weather, as well as display artwork or family photos.

Ambient Mode relies on the SmartThings phone app to work. To set it up, you just must take a photo of your QLED TV and the surrounding wall. After that, the set determines the best pattern to display, a process that takes around five seconds. Based on a few demos at the event, the feature is intriguing, especially for people who wall-mount their sets. It’s probably not enough to tempt shoppers away who care more about image quality, but it’s useful for style conscious buyers.

Samsung also improved its single cable solution on its Q7F and Q9F models. Just like last year, it’s a single optical fiber wire that connects to a separate box that houses all your typical inputs. This time, though, that cable also carries power. Samsung had to make it a bit thicker to make that happen, but it seems like a worthy trade-off. Having to run power separately kind of defeated the purpose of the company’s single-cable vision. The TVs come with a 5-meter cable, but you can also order a 15-meter version separately.

As you’d expect, Samsung is also making the QLED TVs smarter with Bixby integration. It replaces S-Voice, the company’s middling voice interface, and lets you search for content across TV and streaming services (no Netflix yet, though). Bixby isn’t as advanced as its mobile sibling, but it’s a first step towards unifying the company’s platforms. With SmartThings support, you’ll also be able to control compatible smart devices right from your TV. That’s especially useful for things like smart cameras since they can show up on your screen.

And of course, there are plenty of image improvements in the new QLED TVs. Most notably, Samsung added Direct Full Array backlighting to the Q8F and Q9F. That’ll let the TVs handle contrast and black levels better than the company’s edge-lit displays. Vizio has offered full-array backlighting in its TVs for years, which notably cost much less than Samsung’s. It’s about time the Korean electronics giant caught up.

From what I could tell, the QLED sets all looked better than last year’s models. The improved backlighting was easily noticeable on the higher-end models, though I wish Samsung was able to deploy it across the entire lineup. The Q6F and Q7F still rely on edge backlighting. As a tradeoff, those sets are a bit slimmer.

It’s strange to think that Samsung’s most exciting new feature shows up when their TVs are off. That’s not exactly a put-down, though, since background blending isn’t something anyone else is offering yet. Beyond that, it looks like Samsung has an interesting year in home entertainment ahead. The Wall will be available sometime in August, and these QLED sets will start rolling out later this month.

BioLite comes up with FirePot, a solution to your camping troubles