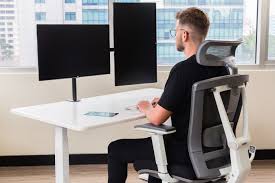 Autonomous Standing Desk can order your lunch for you

Autonomous says its new SmartDesk 3 is “the world’s most powerful AI-powered standing desk.”

What even is an AI desk? To Autonomous, it means a desk that can order food for you. The company apparently partnered with Delivery.com to offer food suggestions on the desk’s built-in control panel. It can “anticipate when you’ll be hungry,” too. I would guess this means it knows the time.

The company also says users can adjust Spotify and Nest and that the desk will learn their preferences. It isn’t clear how well this works or what kind of temperature adjustments you’d routinely need. The company also says the built-in display syncs with Google’s software suite to notify users when they have meetings. There’s also an Uber button so you can request a ride from your desk. So basically, Autonomous built a touchscreen tablet into a desk and preloaded some apps. That seven-inch display has a 400×800 resolution and connects to Wi-Fi, by the way.

Is operating a built-in touch screen display easier than taking out your phone? Maybe, although it does mean someone walking by could just order lunch on your account. I hope it’s password protected. Autonomous announced the launch of the newest iteration of its SmartDesk in a press release today and is claiming it’s “the world’s most powerful AI-powered standing desk.”

SmartDesk 3 is physically like many other motorized sit-to-stand desks out there in that it uses electronic controls to raise or lower the desktop to accommodate a user whether they’re seated or standing up. However, given that Autonomous prides itself on finding futuristic solutions for common office issues, the SmartDesk 3 has one key difference: a fully integrated touchscreen display powered by Autonomous’ Smart Office AI literally embedded in the desk.

Founder and CEO of Autonomous, Duy Huynh, had this to say about how SmartDesk 3 fits into the company’s vision:

SmartDesk 3 brings the office into the 21st century, creating a work place that is dynamic and responsive to your needs, which is consistent with our commitment to build products for the office of the future.

The embedded tablet has a 7″ display and is powered by Autonomous’ own OS platform and has both Bluetooth and WIFI capabilities, so it can interact with the apps on your phone. It features many of its own shortcuts, too – you can make coffee, order food, check the weather, play Spotify playlists, and even request a ride from Uber. Because the tablet syncs with Google Calendar, it will remind you of any meetings you might have throughout the day. And in addition to all of that, SmartDesk 3 monitors how long you sit or stand and reminds you to either stretch your legs or take a break to relax when it feels you need it. After using the AI for a week or so, it will learn your habits – say, when you usually start getting hungry – and begin to anticipate your needs.

The desk itself has height settings ranging from 24″ to 50” and can lift up to 300 lbs. of weight at 2.3″ per second. Its base is made of industrial-grade steel while its surface is made of a durable combo of MDF (medium density fiberboard) and scratch-resistant veneer. It also boasts a dual motor, and the company claims it moves silently with absolutely no wobbling when in action.

The SmartDesk 3 is currently available for purchase on the Autonomous website, and right now you can cash in on an early bird special that will get you the desk for $500. However, after that limited stock has been grabbed up, the desk will cost $600.