Innovation for Africa » Blogroll » Rotating skyscraper set for Dubai in 2020

Get to your location easier with what 3 words
Can A.I. save you from yourself? 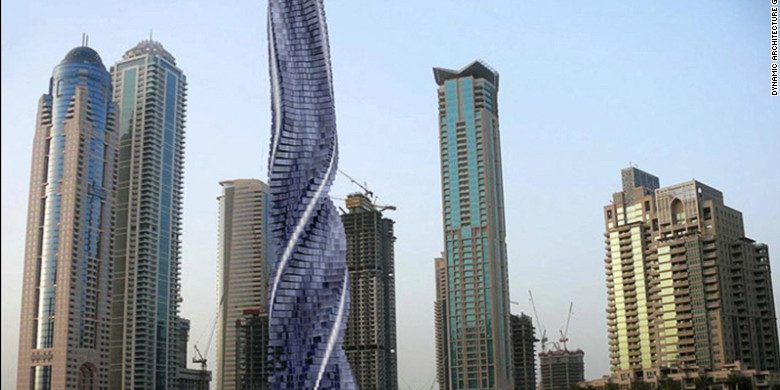 Rotating skyscraper set for Dubai in 2020

A shape-shifting, rotating skyscraper is set for Dubai by 2020

The 80-storey tower will constantly be changing shape as residents choose to rotate their homes, according to architectural firm Dynamic Group. The 80-storey Dynamic Tower will be the world’s first skyscraper made up of separate rotating floors attached to a central column.

Residents will be able to control the rotation speed and direction of their individual luxury apartment. Fancy catching a bit of afternoon sun? “Turn left 90 degrees.” Want to mess around with the window cleaner? “Rotate right, max speed.”

Proposed back in 2008 by architect David Fisher before being put on hold, the project is said to have been rekindled and is projected to be 420m tall when complete, making it the third tallest building in Dubai, after the Burj Khalifa (828m) and Marina 101 (432m).

The Dynamic Tower will also generate its own energy through 79 wind turbines placed between each floor, as well as solar paneling that will coat both the roof of the building and the roof of each level.

The tower will be the world’s first prefabricated skyscraper, with Fisher saying that up to 90 percent of the tower, excluding the central column, could be built in a factory and then shipped to the construction site. Each apartment will then be fitted to the central column, piece by piece.

Doing so would not only decrease both the costs of the project and the amount of workers needed, but would also allow for the tower to be built up to 30 percent quicker than a skyscraper of a similar size.

Saying that, the project is still set to cost Dhs1,212,007,500 (over 1.2 billion). However, Dynamic Group, the company behind the project, told What’s On back in 2016 they plan to have the tower finished by Expo 2020. Although they don’t yet have a confirmed location for where they’ll build or a construction date.

It may soon be adding a new one — the world’s first rotating skyscraper.

It’s the brainchild of architect David Fisher of Dynamic Architecture.

Fisher envisions an 80-story, 1,273-foot tower in Dubai with floors that can rotate 360 degrees in both directions. He said he got the idea for a rotating tower that continuously changes shape more than a decade ago while staring out of the Olympic Tower in New York.

Fisher first pitched his idea back in 2008, but it never got off the ground. Now Dynamic Architecture hopes the skyscraper — dubbed the Dynamic Tower — will be gracing Dubai’s skyline by 2020. It would be one of Dubai’s tallest buildings, in a city awash with high-rises.

If everything goes according to plan, the building’s rotating floors be will be just one of its high-tech draws. Voice-activated technology would allow residents to spin their apartments just by speaking, and up to 79 wind turbines placed horizontally between the floors and solar panels on the roof will produce the tower’s energy.

There’s more: A special elevator built inside the central concrete core will let residents transport their car to their floor and park it next to their apartment.

The tower’s floors would be prefabricated units, made of steel, aluminum and carbon fiber materials. Fisher says the floors will be assembled at a factory and then later attached to the tower — that’s another first for skyscrapers.

It’s unclear what the price tag is for this massive project, but Dynamic Architecture says the price for an individual apartment unit could range from $4 million to $40 million.

Fisher hopes his tower is the beginning of a change in the way architects think about their jobs.

“An architect should design buildings that adjust to life,” he said. “They should adapt to our space, our functionalities and our needs that change continuously — and even to our sense of beauty, itself in continuous motion.”

Statistics and the influence they have on innovation